The works of Roderick Hietbrink (1975, Netherlands) elegantly link the narrative video space with the real space of a gallery. His main means of expression are videos, video installations and photography. His works o en suggestively play with the crossing of certain borders, be the borders represented by a space that is arti cial or natural, by the tragical or comical spirit of a harlequin or narrativity or the lack of sto- ryline. Hietbrink’s approach is always based on precise and artistic administration, o en distorted by the moment of transgression into an existential feeling of uncertainty and questioning. Nature, wild or forci- bly imprisoned in the environment of civilization, sometimes even in revolt, is one of his major topics. In a sense, his work is also a parable, no matter if it is an image of a bush being tortured in a closed space or the melancholy of a harlequin. Perhaps this is related to his general life feeling, nevertheless it is a fun- damental feature of his work. Roderick Hietbtrink lives and works in Amsterdam and Rotterdam. His in- stallation in the I.D.A. is his third exhibition in the Czech Republic, but actually his rst single one here.

Harlequin, the deceitful hero of the Italian ‘Commedia dell’arte, is at first sight, gluttonous and idiotic, but at heart he is a sly schemer, a destroyer, a deconstructionist, a lover and a supple dancer. Harlequin likes to deceive, as he is not a mere amusing and picturesque prankster. Just like its main protagonist, Harlequin, Roderick Hietbrink’s video is also deceiving. Initially, the video tries to make us believe something, showing, however, that reality is completely di erent. Firstly, the video misleads us due to its colours and, secondly, when it is pretending to be dealing with video material in a set form. Factually, the form has not been ap- plied. Moreover, the entire action takes place in designed environment. Hietbrink’s video is an inverse video performance on a staircase. One would want to say that it is always the same activity, as if in a loop, but that would be making it too simple. Hietbrink only simulates a loop. Actually, each entry is a new video and each video is di erent. Each bang on the head is di erent, original and autonomous. By constantly repeating the head-banging, a potential original error turns into a theatre play, into a performance. I believe that Hiet- brink is pursuing neither a joke nor the illusion of a rehearsal in some strange theatre. It is not his intention to make fun of Harlequin neither does he want to be a comedian nor his art to cause headaches. He does not even want to make jokes about the Blue Pablo Picasso. Staircases leading to nowhere, strangely out of context in a bland and uninteresting room, remind you of a theatre backdrop. Similarly to the way theatre scenery helps people travel to other countries, di erent worlds, imaginary cities, buildings and corners or allows them follow a direct path to literary works and theatre plays, stairs are a transit zone, too. Stairs take us to the upper oors of buildings, open new views and perspectives. Doors open new rooms, new possi- bilities, we can run away through them or hide behind them. We can slam doors in anger, or simply close them behind us. Our doors lead us nowhere, they are deprived of their handles and other cognitive char- acteristics, they are turning into a mere projection panel for videos. Neither do stairs in Roderick’s videos have any exit nor way out, they represent a background out of order, nevertheless, with a slight hint of utility. 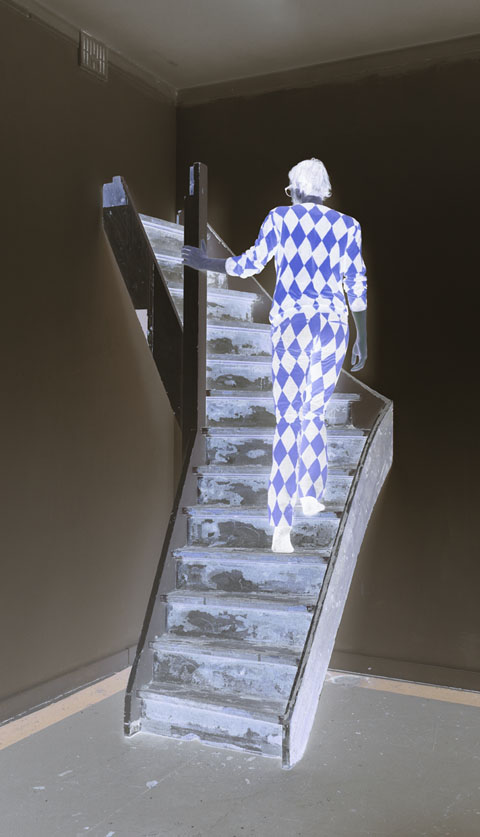