The Karlin Studios exhibition space has been a part of Prague’s cultural scene for ten years now. Since the end of 2005, this somewhat picturesque building, which is a fragment of a former ČKD factory complex, has hosted within its walls more than 100 solo, curated, and group exhibitions showcasing the work of a wide range of contemporary Czech and foreign artists. At the time of its inception, it was one of only a handful of similarly expansive spaces serving as art galleries. In addition to the aforementioned gallery, the facility has also hosted several other gallery projects (Galerie Behémót, Galerie Entrance, Galerie K.ART.ON, and Galerie KIV) and, namely, also comprises extensive art studio spaces. In operational matters, the project is interlinked with Galerie Futura, however, its exhibition program has always had a specific feel. The facility’s location in Karlín, an area of great interest for developers, had much to do with its very beginning. At the time, the developer who owned the building made it temporarily available for cultural purposes. Ten years on, the history of the facility has been fulfilled. The expansion of investment activities in the surrounding area together with the gradual transformation of the entire neighborhood into an office zone, has reached the point where the facility too must make concessions to the ongoing development. With the genius loci of the old industrial Karlín suburb, the facility, as the very last, must make way for the sterile, delocalized environment of office buildings. When approaching the gallery via the lane between the new buildings, one begins to feel that the Karlín Studios building no longer belongs here.

This exhibition project offers a look back at the history of Karlin Studios. It is not, nor can it ever be, an objective and impartial assessment of the studios’ history. Rather it is an assemblage of memories coming forth from the dialogue of three curators and representing, in their opinion, the finer moments of the facility’s history. The composition of the exhibited artworks comes from exhibitions and projects of the past. Each of the exhibition’s artists, in various periods, has either contributed to the curatorial management of Karlin Studios, or has held his or her own exhibition or curated project here. The result is as lopsided as the human memory or the justice of discourse through which we view history. Many of the works are being presented here thanks to their direct connection to the space in question, thanks to which in turn we are able to recall them in an authentic context before they are condemned to the mere role of a visual or textual archive of information. The format of materialized memories that this exhibition has acquired puts the very host facility into a similar role. Enjoy the exhibition in a building that has become a memory of itself; a building that no longer belongs here; a building that has become a heterotopic place between the past and the present. 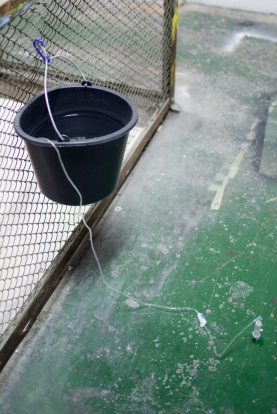